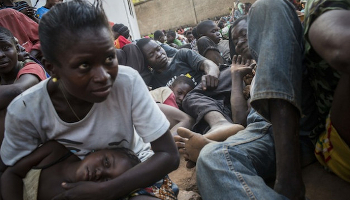 Dec10
Addis Ababa – The African Union is preparing to deploy thousands of troops in the Central African Republic as a deadly conflict there spirals further out of control.
On Monday, Dec. 9, African Union (AU) Deputy Chairperson Erastus Mwencha met with diplomats at its headquarters in Addis Ababa, Ethiopia, to work out the details of AU troops’ deployments, logistics and funding. After the meeting, he told IPS that Burundi is the only confirmed troop supplier so far, but several other countries including Rwanda and the Republic of the Congo are discussing sending forces as well.
French troops have already begun deployments in the capital city of Bangui, which was taken over by a rebel coalition called Seleka in March. Since beginning their advance across the country in December 2012, Seleka fighters have caused turmoil across the countryside, further destabilising areas already plagued by rampant poverty and food insecurity.
In Bangui the situation has been especially dire since Thursday, Dec. 5, Amy Martin, head of the Bangui branch of the United Nations Office for the Coordination of Humanitarian Affairs, told IPS. “Heavy arms were being fired, light weapons were being fired, and tensions remain very high in some neighbourhoods,” she said, adding that the problems are just as serious outside of the capital.
“In the interior, Seleka units have taken control of territories, and whoever was the commander became the law in each town. Those people, having no support from the central government, are basically living off the population, partly through illegal taxation. So you end up with a bunch of warlords and criminal gangs.”
A U.N. resolution last week approved the deployment of up to 1,200 French and 3,500 African troops to help stabilise the country of 4.6 million. But following the recent surge in violence, which has already killed at least 400 people in Bangui since Thursday according to the Red Cross, African and European leaders agreed at a weekend summit in Paris to increase the number of French troops to 1,600, and the number of African troops to as much as 6,000.
Regarding funding, Mwencha noted that “we have been grateful that the U.S. and the European Union have already made some indication to support these operations, and so we are also trying to coordinate to see how their support can be channelled to support this mission.”
The International Support Mission to the Central African Republic, or MISCA, will be fully deployed as soon as possible. They will join the African forces that were already in CAR as part of the Mission for the consolidation of peace in Central African Republic (MICOPAX), a peacekeeping group first stationed there on the initiative of the Economic Community of Central African States.
“MISCA is going to be an African mission, so all troops [will] be under the command of the African forces, but there will of course be a transition,” Mwencha said. “There was MICOPAX and there are the French, but all those will converge with the African forces once we’re on the ground.”
But the CAR crisis has raised some doubts of African troops’ abilities to quell violence on the continent, according to Thierry Vircoulon, the International Crisis Groups’ project director for Central Africa. “Unfortunately, the French are the only ones willing and able to do the job at this stage. The African peacekeeping force demonstrated its ineffectiveness to secure Bangui,” he said to IPS, noting that the French troop deployment was welcomed by CAR and its neighbours during the U.N. summit.
At the Paris summit, leaders discussed the prospects of setting up a permanent African force capable of intervening independently in times of crisis, rather than wading through the logistics of each individual deployment whenever crises occur.
continue reading on Ips Africa
By Jacey Fortin – Ips Africa
Pubblicato da Studi ME Africa a 9:51 PM