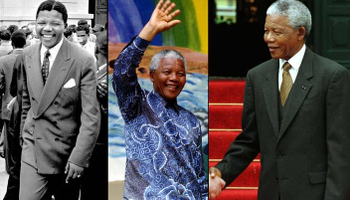 Dec15
If there were one outfit that would symbolise Mandela and that would remain an emblem of his style, it would have to be the familiar “Madiba” shirt made of Javanese silk batik or African fabrics. Created in 1990 by Sonwabile Ndamase, a fashion designer who was also close to the family, they were, and still are, the symbol of Mandela’s freedom.
After spending 27 years in jail, Mandela wanted to translate his liberation into a specific style, something that would tear down conformism and the sometimes-unbearable stiffness of traditional suiting.
“The decision to make a style statement was one Nelson Mandela made on his own. He wanted to identify with the people. The majority of South Africans never wore suits, so he wanted to have a specific kind of shirt made – cut long so it could hang over trousers, both coloured and plain, with the conventional pointed collar as well as the standing Nehru. As always, ‘Madiba’ wanted to do things his own way,” says Ndamase. “The result was a shirt that has made its mark on the world: never casual, always buttoned to the top, classic, well pressed, and usually in boldly patterned fabrics, such as West African damask, wax-prints and traditional Xhosa cloth with braid.”
The choice was astute: the shirt buttoned up to the collar, reminiscence of his 1961 interview, revealed a grounded attitude, a solid man with a sensitive allure, softly but firmly in control. The neck was held straight in its collar and the shirt was always impeccably crisp. And yet, it fell over the pants, in a well-thought-out négligé, and was worn without a jacket, as if not to be taken too seriously.
With this one shirt, Mandela gave to the world the image of a humble man ready to take charge and do things his way, differently. He dressed for the job he wanted, president of the people of South Africa. Long before Barack Obama and his rolled-up sleeves and tie-less suits, and long before he even became the president of our country, Mandela understood how to present himself and the importance of his appearance.
From an already young age, he was attentive to his clothes and valued the concept of elegance. In his biography on the former President, Mandela, the Authorised Biography, author Anthony Sampson notes: “The Regent, Jongintaba, otherwise known as David Dalindyebo, became Mandela’s new father figure. He was a handsome man, always very well dressed; Mandela lovingly pressed his trousers, inspiring his lifelong respect for clothes.”
Early pictures of Mandela portray him here, in a double-breasted suit, given by the Regent, already buttoned all the way up, the wide peaked lapels high on the chest, a white shirt and tie underneath, a handkerchief in the breast pocket; there, bearing the fashion as seen in the 1940s and 1950s’ in Sophiatown, wearing his favourite double-breasted suit Chicago-style, confident, the handkerchief still in place, a colourful patterned tie as a vibrant hint. His style was structured, fitted, his elegance undeniable.
continue reading on Daily Maverick
By Emilie Gambade – Daily Maverick
Pubblicato da Studi ME Africa a 11:43 PM