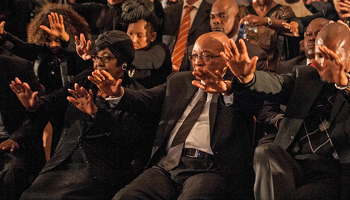 Dec9
Former president Nelson Mandela sent a note to his friend and comrade Ahmed Kathrada four years ago. It read:
Dear Kathy,
Our warmest congratulations on the occasion of your eightieth birthday. We have spoken often of the long road we have travelled together.
But Madala, you would agree that to find ourselves still going strong after nearly a decade into the twenty-first century is extraordinary. Your friendship has been a great resource to me in good times and in bad.
We join with South Africans and many friends abroad in celebrating your life and acknowledging the many contributions you have made to the struggles for justice in our country.
Happy birthday Kathy. May the years ahead bring you good health, and at least some rest in the midst of your many continuing projects.
Kind regards
N.R. Mandela
Since Mandela’s passing on Thursday night, Kathrada has had none of the rest his friend wanted for him. The world’s media has been interviewing him as one of the few surviving leaders of the golden generation of the ANC which Mandela led. Even as Madiba was drawing his last breaths, Kathrada was at a colloquium talking about his life and legacy. For Kathrada, it seems as if the best way for him to pay tribute to his friend is to share the story of their journey together with others.
While prayers and memorial services were taking place across the country on Sunday, the event hosted by the Ahmed Kathrada Foundation at the Gandhi Hall in Lenasia was a rare peak behind the walls of Robben Island when it quartered South Africa’s liberation struggle royalty. Kathrada, together with Mandela, Walter Sisulu, Govan Mbeki, Andrew Mlangeni, Billy Nair, Elias Motsoaledi, Raymond Mhlaba and Dennis Goldberg were sentenced to life imprisonment on Robben Island when the Rivonia Trial ended in June 1964. Laloo Chiba joined them in the B Section of the prison a few months later after he was sentenced to 18 years’ imprisonment.
The common traits of most of the B Section veterans is their penchant for debate and teasing each other. Sunday’s memorial service was no different, with Kathrada and Chiba each wanting to talk about different issues and taking playful jibes at the other. Kathrada told how Chiba, who was in charge of transcribing the manuscript of Mandela’s autobiography The Long Walk to Freedom to microscopic shorthand, was a “very thorough chap”, even destroying a transcript because of a “blemish”. Chiba corrected him to say the transcript he destroyed because of the blemish was actually from Sisulu’s book, not Mandela’s.
Kathrada related how when he was in solitary confinement for six months, Chiba smuggled in a book to him. But to Kathrada’s eternal exasperation, the book was about horrible diseases, which he was forced to read.
continue reading on Daily Maverick
By Ranjeni Munusamy – Daily Maverick
Pubblicato da Studi ME Africa a 9:44 PM