UK business tycoon Richard Branson has called on companies and tourists to boycott Uganda after its parliament approved a bill to toughen the punishment for homosexual acts.
It was against his conscience to support a country which carried out a "dreadful witch hunt against the gay community", he said on his website.
The bill proposes a life sentence for certain homosexual acts.
It has been condemned by world leaders since it was mooted in 2009.
US President Barack Obama called it "odious".
Mr Branson said he had been seriously considering investing in Uganda after being "courted" by government officials.

End Quote Richard Branson UK businessman
However, he had decided not to "support" Uganda because of its "witch hunt" against gay people.
"I would urge other companies worldwide to follow suit. Uganda must reconsider or find it being ostracised by companies and tourists worldwide," Mr Branson said.
Mr Branson is the founder of Virgin Group, which has more than 400 companies worldwide, focusing mainly on travel, entertainment and telecommunications.
He is also a leading philanthropist who supported charities set up by South Africa's first black President, Nelson Mandela.
Mr Branson attended Mr Mandela's funeral last week.
"Governments must realise that people should be able to love whoever they want," he said.
He said it was not for any government "to ever make any judgements on people's sexuality".
"They should instead celebrate when people build loving relationships that strengthen society, no matter who they are," he added.
Uganda's President Yoweri Museveni has not yet signed the bill into law while Prime Minister Amama Mbabazi opposed the vote in parliament on the grounds that there was no quorum. 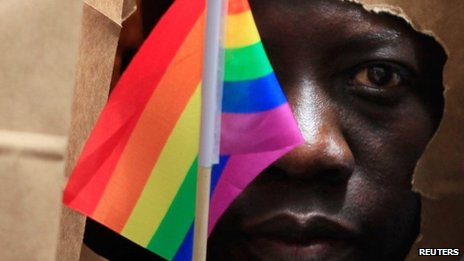 Some gay Ugandans have fled the country, saying they are being persecuted
However, MPs pushed ahead with the vote.
The bill's supporters say it protects traditional family values, which they allege are under attack from Western-inspired gay rights groups.
The private member's bill originally proposed the death penalty for some offences, such as if a minor was involved or the perpetrator was HIV-positive, but this has been replaced with life in prison.
The bill also makes it a crime punishable by a prison sentence not to report gay people to the police.

Pubblicato da Studi ME Africa a 10:58 AM