Can documentary film as a genre do justice to the astounding life of Fela Kuti? 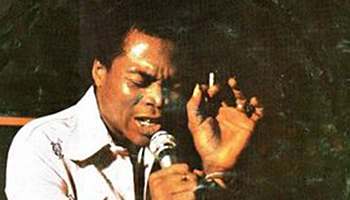 Mar28
Documentary films truncate an entire life into fleeting bursts of exuberance and somber moments. Any moments that exist in between, however significant they are, are left out completely or brushed over. In making a documentary, on any subject, the director carves a narrative. And at times, the narrative carves itself. The decision then to make a documentary on the astounding life of Fela Kuti is a brave one. What do you exclude? What do you include? And most importantly, what informs these decisions?
The other question that is important to address is, who has the right to speak about Fela Kuti? And how is that right earned? On these questions, the documentary succeeds by rounding individuals that worked with Fela, friends, his kids, former lovers, his managers and other musicians.
“Finding Fela” attempts to marry two defined art forms: theatre and cinema. For the first half of the documentary (for which there is no trailer online), the Broadway play ‘Fela!’ forms the foundation of the narrative. And immediately, the classic peculiarity of stage plays, which is exaggeration, is evident. Stage plays are primarily concerned with entertaining. The stage play ‘Fela!’ when juxtaposed with archive footage of Fela Kuti is off in its depiction. It never quite convinces. Even at its best moments, that if they existed by themselves would have been incredible, it fails. Sahr Ngaujah, who plays Fela Kuti in the stage play, never dances, sings or speaks quite like Fela. It is burdened with the problem of depiction. The burden being that a depiction can never be adequate, especially when it tries to depict something perfectly. It is better when it falls short. When depiction does not fall short, when something is over depicted, it becomes obvious that it is being staged.
Though Alex Gibney, the director, uses the stage play to weave the story, he stuck to a prosaic documentary style. The result is a formulaic narrative. The documentary is not at all boring. It benefits greatly from Fela’s eventful life, and the rare archive footage of Fela and the great interviewees but it lacks treatment.
In using the stage play to tell the narrative, the documentary has two perspectives. Those of Bill T Lewis, the stage play director, who is concerned with omitting certain aspects of Fela’s life out of the stage play because he finds them troublesome. The other perspective is that of Alex Gibney who is uninterested in any of that but instead is infatuated with Fela’s philandering and polygamy. As a result Fela’s love for women dominates the narrative, unnecessarily so.
The documentary tells of Fela Kuti’s life, not only through other people but through his own words too, he is not merely a point of discussion. His music dominates. The music is dissected and the meaning of it made clear. The documentary aptly captures most of his songs and politics. Fela’s music however has always possessed more than a single layer. It is deep yet it can also be accessible in a form that makes it seem unimportant. His songs are not loyal to one emotion. They can instigate a riot and yet somewhere else, under a different time, they can start a party.
Lewis reveals that compressing Fela’s songs to fit into the length of the play, was an impossible task. This is true for the documentary as well. The two art forms, theatre and cinema, both operate within the confines of time. Fela’s music did not. His songs were as long as they needed to be. The rhythm of the songs was often repetitive, the same rhythm over and over again until the piece of rhythm justifies its own presence, both in the song and in life itself. Fela’s music embodied his feelings. This he says in the documentary. In the play the songs come in short bursts. Each time, the song is separated from the rest of itself, and often from a point that is vibrant enough to reel the audience in. But this works and the documentary will earn Fela’s music many new fans.
continue reading on Africa is a country
by Dudumalingani Mqombothi
Pubblicato da Studi ME Africa a 1:45 PM