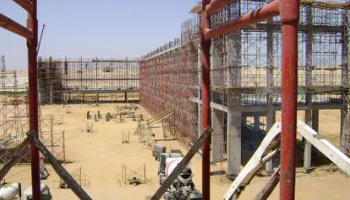 Apr11
Cairo – Momentum is continuing to build towards Egypt’s 26 May elections, which are widely expected to see Abdel Fattah al-Sisi stroll into the presidential office. After a long period of speculation, the recently promoted Field Marshall finally announced last month that he would be taking off his military slacks and stepping into civilian shoes to run for top office.
In a poll in March, 39% of Egyptians said they were planning to vote for him, while fewer than 1% of respondents said they were planning to vote for any of the other candidates. Anything but a Sisi victory seems highly unlikely, and come May, the military’s hold on power will have become even further entrenched. It was only in January 2011 that Hosni Mubarak − a military man too, like all his predecessors since 1952 − was overthrown, but now it seems the Egyptian military is not only back in the seat of power, but perhaps stronger than ever. A look behind the political curtains at the backstage that is the Egyptian economy seems to bear this out.

With around 2 million personnel, including 500,000 in the army, the Egyptian military is the biggest in Africa, and one of the largest in the world. Arguably far more striking than the extent of its physical muscle, however, is the size of economic muscle. Its spokespeople consistently try to play down its role in Egypt’s economy, claiming the military is responsible for just 1% of the country’s GDP, but analysts tend to believe the military controls between 5 and 40% of the economy, with most leaning towards the higher end of that spectrum.
Exact figures are hard to come by. The military’s budget is kept confidential and its business dealings are typically untaxed and unaudited on apparent grounds of national security. It is known, however, that military is involved in countless different businesses in countless different industries. Military-owned companies engage in ventures from cement to shipbuilding, from fertiliser to fridges, and from tourism to televisions. The Egyptian army owns hospitals and child-care centres, it is a huge player in the country’s agricultural sector, and it has various contracts with foreign investors worth hundreds of millions of dollars. The military also owns vast tracts of land. In 1997, a presidential decree awarded the army the right to manage all of Egypt’s unused land. According to some estimates, that essentially gives the military de facto control of 87% of the entire country’s land mass.
continue reading on Think Africa Press
By Joseph Hammond & James Wan – Think Africa Press
Pubblicato da Studi ME Africa a 10:15 PM