The UN is still ashamed over its failure to prevent the 1994 genocide in Rwanda, UN chief Ban Ki-moon has said.
He was addressing thousands of people in the capital, Kigali, as Rwanda began a week of official mourning to mark the 20th anniversary of the genocide.
Many people were overcome by emotion during the ceremony, with some suffering fits.
At least 800,000 people - mostly ethnic Tutsis and moderate Hutus - died at the hands of Hutu extremists.
The killings ended ended in July 1994 when the Rwandan Patriotic Front (RPF), a Tutsi-led rebel movement, marched into Kigali and seized control of the country.
Rwanda's President Paul Kagame and Mr Ban lit a torch which will burn for 100 days - the length of time the genocide lasted. 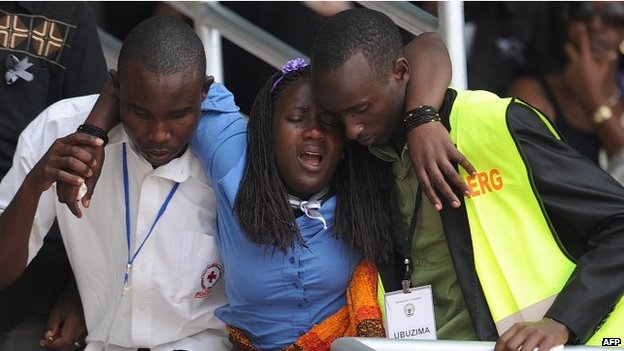 The emotions and memories were too much for some of the crowd to bear
Pubblicato da Studi ME Africa a 9:38 PM