Vogue Italia’s editor wants to help Africa like itself 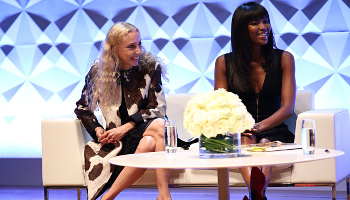 May2
Remember Vogue Italia’s Rebranding Africa issue? (Elliot Ross got jealous and denigrated Ban Ki Moon’s cover model shot in an epic post.)
Seriously, though, it looks like the editor-in-chief Franca Sozzani, who came up with that brainchild, hadn’t yet been informed why the issue was a flop. Because since then, Vogue Italia has forwarded the dignity of and beauty of black people and their histories by labeling a series of simple hoop earrings “Slave Earrings” and included photostories of white models in blackface milling around a backdrop of taxidermied African plains-animals. Had enough? But there’s more: in March 2012’s editorial spread (so it’s not like Sozzani left this one to minions, and innocently had no hand in this), Vogue Italia featured “pregnant” white models in weaves and gold-teeth, pushing prams and eating at their local Micky D’s while taking selfies on ghetto-glorious bling iPhones. They called it the “Haute Mess” editorial, and said something about how it was inspired by Rupaul.
In Vogue circles, all that adds up to Sozzani being the Bishop Tutu of fashion. So as of June 2012, she became the global goodwill ambassador for Fashion 4 Development. What’s that? It’s an initiative with financial backing from the United Nations (read: my tax dollars go to this). The initiative has the potential to do incredible work, creating support networks for fashion economies in Africa countries and providing fashion workers with scholarships in order to further them in their professions — if they had a less ignorant and racist person at the realm.
How do we know that Sozzani will not be the sunshine in the African fashion universe? First, because she recently turned up to Vogue Festival in London last month wearing what looks like a whole Holstein cow. Is this someone’s misguided attempt to copy Nguni cow hides? I don’t know, but then she opened her mouth and made Naomi Campbell, who was sitting next to her, sound like she’s WEB DuBois. Another clue: Sozzani doesn’t seem to be aware that the fashion industry is alive and well in several African countries, and fashion magazines already have a strong presence, working towards the same goals as the UN’s initiative without all that nice backing.
continue reading on Africa is a country
By Neelika Jayawardane - Africa is a country
Pubblicato da Studi ME Africa a 11:19 PM