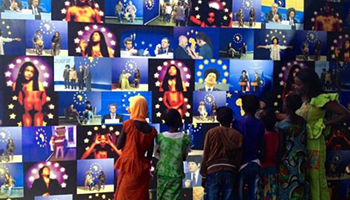 Jun20
Dak’ Art 014 is an art exhibition showing over 120 artists of African descent. It opened on 9th May, with a main international showcase at the Village de la Biennale, a television studio along Route de la Rufisque in Dakar’s industrial area.While it is the only art biennale of its scope today with a mandate to include all artists of African descent, a critical tour of the international exhibition at the Village revealed a daunting diversity of artworks, styles and traditions that made one ask questions about what exactly defines contemporary African art, how contemporaneity might be defined amongst artists of African descent at the Dakar biennale, and whether living on or away from the continent of Africa influences the contemporaneity of the art one produces.
While great emphasis was placed on the Village–an ironic title for an international exhibition–where three curators were invited to select artists, respectively, from North Africa, sub-Saharan Africa, and the diaspora, the biennale had several other “main” events, including an exhibition of guest artists dedicated to cultural diversity at the Musée de l’Ifan, a clearly unfocussed exhibition with selected artworks reflecting no central theme; the African sculpture park. There was also tribute exhibitions to three Senegalese artists: Mamadou Diakhaté, Moustapha Dimé and Mbaye Diop. In addition, an epistemological exhibition titled ‘Green Art’ on the campus of Cheikh Anta Diop University. These latter exhibitions seemed to have a separate, and specific, focus on the local.

Continue reading on Africa is a Country
by Serubiri Moses
Pubblicato da Studi ME Africa a 10:27 PM