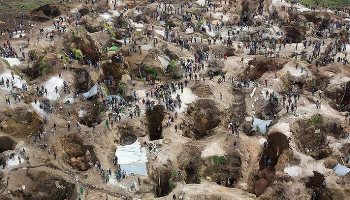 Jun5
Washington – For the first time, nearly 1,300 U.S. companies have filed reports on whether the products they manufacture or sell are made with minerals that have bankrolled conflict in the Great Lakes region of central Africa.
Monday was the deadline for the filings, the first concrete results of a provision passed in 2010 by the U.S. Congress aimed at helping to end the long-running civil war in the Democratic Republic of the Congo (DRC).
Yet the law’s regulatory details have since been the target of sustained legal attacks from companies and lobby groups that have warned that fulfilling the reporting requirements would be onerous and even unconstitutional.
By Tuesday, however, it appeared that most companies expected to file a report on the so-called conflict minerals in their supply chains had done so. Those reports are now publicly available through the Securities and Exchange Commission (SEC), the federal regulator tasked with implementing the rule, formally known as Section 1502.
“This is a historic day. Five years ago this issue wasn’t on anyone’s radar, and now consumers can look under the hood of what’s in a product,” Sasha Lezhnev, a senior policy analyst at the Enough Project, a Washington-based watchdog group, told IPS.
“I think many people knew what companies like Apple, Intel or HP had been doing, as they have been pretty proactive on this issue. But no one has known what companies like Walmart or GM [General Motors] have been doing.”
In 2009, the U.N. Security Council formally recognised that revenues from minerals extraction were strengthening multiple armed groups operating in eastern DRC. The electronics industry has been one of the most significant users of these minerals, which include tin, tantalum, tungsten and gold.
Since then, Lezhnev reports, 95 mines in the DRC have been validated as “conflict free”, while two-thirds of the tin, tantalum and tungsten mines in the country’s east have been demilitarised. Gold remains a significant problem, however, and the Enough Project and others are calling for more concerted action in tightening sourcing decisions, particularly from the jewellery industry.
Box-checking?
Under the SEC guidelines, companies listed on U.S. stock exchanges must now file annual reports describing their efforts to discern whether their products use conflict minerals and, if so, their plans for stopping this practice. Several thousand U.S. companies have been identified as potentially – and likely unwittingly – selling products containing conflict minerals.
continue reading on Ips Africa
By Carey L. Biron - Ips Africa
Pubblicato da Studi ME Africa a 9:56 PM