(CNN) -- Fighters with the militant group the Islamic State in Iraq and Syria reached the triangle border between Iraq, Syria and Turkey, it said in a message posted on Twitter on Sunday.

ISIS took control of Iraq's largest hydroelectric dam on Iraq's Tigris River, which provides power to the city of Mosul about 50 kilometers (31 miles) to the south, the commander of the Peshmerga Kurdish fighters who had been defending the facility said Sunday.
The dam workers remained inside the facility, which fell after a 24-hour battle, Lt. Col. Herash said.
A "horrendous prospect"
ISIS -- known for killing dozens of people at a time, while carrying out public executions, crucifixions and other acts -- has taken over several cities as it seeks to create an Islamic caliphate that encompasses parts of Iraq and Syria.
Daniel Pipes, the president of the Middle East Forum, said seizing dams is a tactic the group uses to gain control of a town and its people.
No dam, however, is as formidable or as important to Iraq as the one in Mosul.
"If you control the Mosul Dam, you can threaten just about everybody," Pipes told CNN's Jonathan Mann.
Pipes said the militant group now has the potential to create a flood so massive and catastrophic that it would not only cause death, destruction and chaos locally in the city of Mosul, but more than 450 kilometers (280 miles) away in Baghdad as well.
"It's a horrendous prospect," he said.
Peshmerga Kurdish fighters also pulled out of the towns of Zumar and Wana after being surrounded by ISIS fighters and isolated from any support, Kurdistan Democratic Party regional official Ismat Rajab told CNN on Sunday. 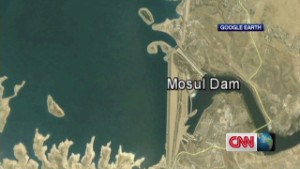 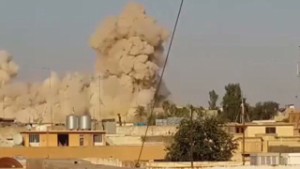 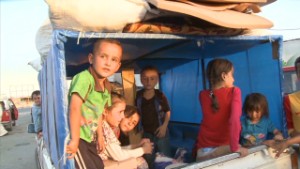 Refugees risk all to escape ISIS
FAA restricts flights over Iraq as conflict with ISIS rages
The United Nations in Iraq warned that 200,000 civilians were trapped in a dire circumstances after ISIS and associated armed groups "seized control of nearly all of Sinjar and Tal Afar districts in Ninewa Province, including the oil fields of Ain Zala and Batma, bordering the Kurdistan Region of Iraq."
Most of the refugees are from the Yezidi sect and have fled to Jabal Sinjar, the United Nations said.
"The humanitarian situation of these civilians is reported as dire, and they are in urgent need of basic items including food, water and medicine.  An unknown number of civilians are also reported to have moved towards Dahuk and Zako in the Kurdistan Region."
ISIS to Christians in Mosul: Convert, pay or die
ISIS took control of Sinjar, a small town inhabited by the Yezidi sect, on Saturday, according to police officials.
An ISIS Twitter posting linked to a statement referencing "the battle of opening the borderline between state of Ninawa and Dohuk provinces."
"The Islamic Caliphate legions have launched since this morning" operations towards the northwestern regions bordering state of Nineveh," the statement said. "God facilitated for the mujahedeen to break into many important areas controlled by the Kurdish gangs and secular militias."
The State Department said Sunday that it was "actively monitoring the situation" in Sinjar and Tal Afar, and said that the U.S. is supporting both Iraqi security forces and Peshmerga forces in the fight against ISIS. "The (ISIS) assault over the past 48 hours on territories along the border of the Iraqi Kurdistan Region and focusing on towns and villages populated by vulnerable minorities, demonstrates once again that this terrorist organization is a dire threat to all Iraqis, the entire region, and the international community," spokeswoman Jen Psaki said in a statement.
U.S. agrees to send 5,000 more Hellfire missiles to Iraq
Pubblicato da Studi ME Africa a 1:02 PM