Among the multitude of tributes for Robin Williams has come a stream from one particular group - people who became teachers after being inspired by his role in Dead Poets Society.
(Spoiler alert: Key plot details revealed below)
"O Captain! My Captain!"
Thousands will have been reminded of the final scene of Dead Poets Society where the pupils of sacked English teacher John Keating stand on their desks in an act of defiance.
The first to stand up recites the first line from Walt Whitman's famous poem, the rest silently stand, ignoring the angry threats of the authoritarian headmaster teaching in Keating's place.
Throughout the film, Keating enthuses his pupils about the power of English Literature and encourages them to follow their dreams. It's Hollywood's damp-eyed paean to the ability of teachers to inspire young people. Thus the response to Williams's death from teachers.

"O captain!! my captain!! you inspired me to be a teacher!!! and I know you have inspired a generation," tweeted Sujan Chitrakar.
"Feel like I lost a mentor. Robin Williams as Mr Keating changed my path in life. Dead Poets Society led me to teaching," added Cori Marino.
"Robin Williams or Mr Keating, my inspiration to become a teacher, has passed away. "Oh Captain, my Captain!" May his soul rest in peace," tweeted Liliana Alvarez.
There have been many more.
As teachers go, Keating was a maverick. He leapt on to desks. He laughed and joked and encouraged his class to rip a page out of a textbook - a section attempting to apply a strict formula to judging what makes poetry good.
"In this class you can either call me Mr Keating," he said. "Or if you're slightly more daring, 'O captain, my captain'." He placed a Walt Whitman portrait above the blackboard.
In a world full of stories about how difficult and stress-inducing teaching could be, Williams as Keating was a cheerleader for possibility.

"He made you feel like it matters, that poetry matters," says Jonathan Taylor, a lecturer in creative writing at the University of Leicester, who was 16 when he saw the film.
"I loved the film so much that maybe on one level it is the reason I became a teacher.
"He understands in the film that education isn't just one little part of your existence, it is life. It's the same thing. It's not just learning Wordsworth by heart, it's about feeling it and understanding why it's important," says Taylor.
"I was the target audience. I was a 16-year-old who loved writing and poetry and literature. The film said things I was already thinking."
Dead Poets Society was released in 1989. Set in the Welton Academy in Vermont, Keating was the liberal new teacher at the very conservative 1950s private school.
His method of education was not focused on grades and exams. Instead his preferred strategy was to allow students to experience their way into knowledge. Lessons were often taken out of the classroom. They were energetic and noisy - and misunderstood by his colleagues.
He drives his class into coming out of themselves. "I want a barbaric yawp," he tells Ethan Hawke's character Todd Anderson. A "yawp" - another Walt Whitman-ism - was an impassioned shout that fired up the shy young Anderson into improvising poetry about a "sweaty-toothed mad man" in front of his classmates.
"We all loved the spirit of it, everyone was talking about it," says Francis Gilbert, an English teacher at Coopers' Company and Coborn Secondary School, Upminster, east London, who was in teacher training when the film was released. 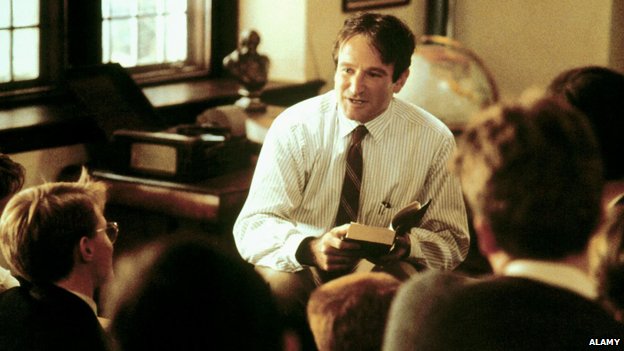 "I loved the way he ripped pages out of books, I still do actually. I've done it metaphorically in my head many times."
Roselyne Marot, a science teacher from Belgium, watched The Dead Poets Society as a teenager. "(He) gave me motivation to become a teacher," she says.
"I decided then that if I ever became a teacher, I would be more of the Robin Williams style in that movie, rather than the classical style.
"He has been in the corner of my mind any time I've been in a teaching situation. And will always be."
It was Keating's passion for the subject that many admired. He saw literature as being as essential to humankind as air and water.
"That love for the subject is something I've always tried to bear in mind as a teacher," adds Gilbert.

Dominic Cooper in the History Boys, which also featured an inspirational teacher
Keating espouses Horace's famous phrase from the Odes - "carpe diem" or seize the day. He tells his pupils: "We are food for worms, lads. Believe it or not each and every one of us in this room will stop breathing, turn cold and die."
Pointing at old photographs of students, he says: "These boys are now fertilising daffodils. But if you listen real close, you can hear them whisper their legacy to you. Go on, lean in. Listen, you hear it? Carpe diem, seize the day boys, make your lives extraordinary."
The last line of this speech has been repeated many times since Williams's death.
Of course, Keating's teaching methods lead to his downfall. He is sacked from Welton Academy - unjustly forced out by parents and staff who see his ideas as being dangerous and wrongly blame him for the suicide of a pupil.
And anyone expecting the average secondary school class to be anything like Keating's is going to be in for a rude shock. An unbridled wave of enthusiasm is hard for even the most daring maverick teacher to generate.
"The really inspirational teachers that I have come across often struggle in the education system," adds Taylor. "That doesn't stop them having a huge effect on their students."
Fifteen years later, Alan Bennett's The History Boys presented another, and slightly less sentimental, side of the same coin.
But in Keating, Williams represented a teacher who taught more than literature - he tried to change lives and create a new set of classroom ideals.
Subscribe to the BBC News Magazine's email newsletter to get articles sent to your inbox.
Pubblicato da Studi ME Africa a 11:00 PM