Lapo Pistelli: ‘The more we spend on Ebola, the less we will spend in the future’ 0 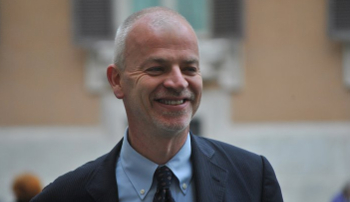 Sep19
Brussels – On the 22nd and 23rd of September, EU Health Ministers will gather for an informal meeting in Milan, during which a session will be devoted to discuss EU measures deployed to fight the Ebola outbreak in West Africa. The European Commission has already announced 150 million euros of aid devoted to the crisis, and funding pledged by the Member States amounts to a total of 78 million. Afronline.org spoke to Italian Vice Minister of Foreign Affairs, Lapo Pistelli, on Italy’s response to the crisis.
Mr. Pistelli, how is Italy fighting against Ebola in Sierra Leone at the moment?
Italy’s presence in Sierra Leone is not a recent phenomenon. Our organisations have been working there on a steady basis for several years. The main ones are Medici con l’Africa Cuamm, Emergency and the Italian branch of Médecins Sans Frontières. We also tackle different aspects of the virus: some of our NGOs focus on treating Ebola-infected cases, others on spreading awareness in society, and some work on issues of containment in regions far away from the centre. We aim to provide one hundred treatment units by the end of this month. Our level of activity should also increase, as the Italian budget will disburse an additional four million euros before the end of the year. The more we spend now, the less we will spend in the future.
Today you are gathered here in Brussels to coordinate this aid with other Member States. What are the main decisions you have made so far?
There will be an informal meeting in Milan next week where our health minister will wrap up today’s discussions. It appears the issues are twofold. First we need to create strong advocacy within Member States in order to raise money to fight the virus – as I said, the more we spend now the less we will spend in the future. Secondly we must be prepared for the treatment of potential Ebola cases in Europe. This does not simply involve a medical team or doctors, but requires efficient coordination between the various assets single Member States have already put in place. In this regard, I am happy to say Italy is one of the best equipped, but we need to consider every single member and their contribution to the whole system. Over the next fifteen days, we hope to establish a common framework of action that adds value to the individual assets provided by Member States. The informal meeting in Milan next week will be crucial.
By Joshua Massarenti – Afronline.org
Photo credit: Salvatore Contino
Pubblicato da Studi ME Africa a 11:34 PM