Obama to reveal Isis strategy – but pledges 'no Iraq war' 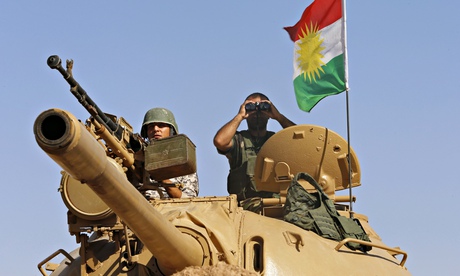 Barack Obama will soon announce his plan to tackle Isis, which may include sending more support to Kurdish peshmerga troops fighting Isis in Iraq. Photograph: Ahmed Jadallah/Reuters
Barack Obama will announce a new US "game plan" for an offensive against Islamic State (Isis) this week, the US president said on Sunday as efforts to build an international coalition against the extremists made progress.
The US president – who had been derided for saying last month he did not have a strategy to contend with Isis – said he would seek congressional support on Tuesday and then "describe what our game plan's going to be" in a speech on Wednesday.
"I just want the American people to understand the nature of the threat and how we're going to deal with it and to have confidence that we'll be able to deal with it," the president told NBC's Meet the Press programme, broadcast on Sunday. "The next phase is now to start going on some offence."

The US said on Sunday it had carried out five strikes on an Isis patrol threatening the Haditha dam – Iraq's second biggest hydroelectric facility.
On the same day, the Arab League called on members to support international efforts against Isis, with its head, Nabil Elaraby, calling on member states to confront it both militarily and politically.

It is unclear whether Elaraby's appeal, made at a foreign ministers' meeting in Cairo, will succeed in galvanising Arab state support for a US-led coalition against the Islamists. Arab governments have been reluctant to take an active role for fear of becoming targets of the new wave of violent jihadism that has swept through Syria and Iraq.
A so-called "core coalition" of 10 countries to tackle Isis announced at last week's Nato summit in Wales by the US secretary of state, John Kerry, had no Arab members and included only one Muslim state, Turkey.
Obama went out of his way to stress that the new offensive would not represent the unravelling of his most prized foreign policy achievement, the extrication of his country from costly and bloody wars abroad, reiterating his administration's pledge that it would not send ground troops to either Iraq or Syria, where Isis controls a large swath of territory.
"This is not the equivalent of the Iraq war," he said. "What this is similar to is the kinds of counter-terrorism campaigns that we've been engaging in consistently over the last five, six, seven years.

"We are going to be a part of an international coalition, carrying out air strikes in support of work on the ground by Iraqi troops, Kurdish troops," he said, adding that increased US military commitment was inevitable in the face of the looming menace. Obama said that there was no intelligence suggesting an imminent Isis threat to the US homeland, but he pointed out that the group, which has publicly murdered two American journalists, has attracted foreign fighters from western nations who could travel to the US "unimpeded" and eventually pose a threat.
David Cameron will brief MPs on the outcome of the Nato summit before a full-day debate on Wednesday which will give MPs a chance to discuss but not vote on any specific form of military action. Ministers are keen to see if there is support for action against Isis in Syria as well as in Iraq.
The government is increasingly confident that a broad-based new government will be formed in Baghdad this week, and hopes that this will encourage the Sunni population in Iraq to support efforts to tackle Isis in Sunni-held areas.
Britain will not join the US in carrying out air strikes against Isis until the formation of a government in Baghdad, a meeting of the UN security council and further practical expressions of Arab support for attacking Isis.
The outgoing head of the British army, General Sir Peter Wall, said Britain should not rush into military action. He told the Telegraph that the government must be cautious because it has little idea of the capabilities and strengths of the organisation.
A key element of Obama's US strategy will be to build a regional alliance to contain and ultimately reverse the spread of Isis. Kerry spoke to Elaraby by telephone before the weekend meeting of Arab foreign ministers.
The Arab League chief said it was necessary for its members to take a "clear and firm decision for a comprehensive confrontation" of what he described as "cancerous and terrorist" groups.
"What is happening in Iraq, and the presence of an armed terrorist group that not only challenges the state authority but its very existence and that of other countries … is one of the examples of the challenges that are violently shaking the Arab world, and one the Arab League, regrettably, has not been able to confront," he said.
Kerry is also expected to head a US delegation travelling to the Middle East this week to rally support. He is hoping to enlist countries in the region before a meeting of the UN security council hosted by Obama in the week of 22 September in New York.
Iraq has welcomed greater US military involvement, but the Obama administration has been keen to emphasise that its offensive against Isis does not amount to tacit support for the Syrian regime of Bashar al-Assad. Rather, the US sees the spearhead of its campaign against Isis in Syria as another wing of the anti-Assad opposition, the Free Syrian Army, which America is helping to train and equip. However, Obama's remarks made it clear that the US priority in Syria now was taking on Isis rather than the regime.
"Our attitude towards Assad continues to be that through his actions, through using chemical weapons on his own people, dropping barrel bombs that killed innocent children, that he has foregone legitimacy," the president said. "But when it comes to our policy and the coalition that we're putting together, our focus specifically is on [Isis]."
"I will reserve the right to always protect the American people and go after folks who are trying to hurt us wherever they are.

"But in terms of controlling territory, we're going to have to develop a moderate Sunni opposition that can control territory and that we can work with," he said. "The notion that the United States should be putting boots on the ground, I think would be a profound mistake. And I want to be very clear and very explicit about that."
Pubblicato da Studi ME Africa a 2:22 PM