UN to send investigators to Iraq over Islamic State 'atrocities' 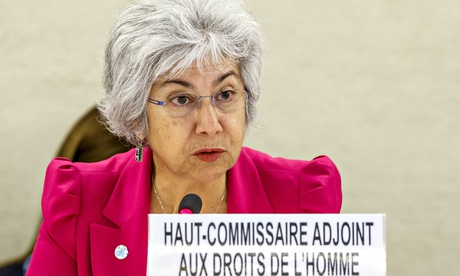 Flavia Pansieri, UN deputy high commissioner for human rights, during the emergency debate in Geneva. Photograph: Salvatore Di Nolfi/AP
UN officials are to investigate atrocities in Iraq after persistent reports that Islamic State fighters have carried out "acts of inhumanity on an unimaginable scale", including beheadings and other killings, forced conversions, slavery and sexual abuse. Speaking in an emergency debate on the crisis in Geneva, Flavia Pansieri, the UN's deputy human rights commissioner, said Iraqi government forces had also committed atrocitiesin three months of fighting, though not on the same scale, Reuters reported.
Iraq's human rights minister, Mohammed Shia' Al Sudani, told the UN session that IS fighters "oozing with barbarity" threatened his country, but he did not immediately respond to allegations against government troops. "Isis is not an Iraqi phenomenon," he told the 47-member human rights council. "It is a transnational phenomenon that poses an imminent danger to all countries of the world."
The council agreed to send a mission to Iraq to investigate all abuses by IS and "associated terrorist groups".

Islamic State, previously known as Isis, has seized large areas of Iraq and neighbouring Syria, declaring a cross-border caliphate (Islamic state) and driving hundreds of thousands of Iraqis from their homes. At least 1,420 people were killed in Iraq in August alone. Abuses carried out by the group included the filmed beheading of the abducted US journalist James Foley.
The one-day session was called by Iraq with the support of allies including the US and Iran. The new UN human rights chief, Prince Ra'ad Zeid al-Hussein, is a member of the Jordanian royal family.
Diplomats convened after the US launched airstrikes to prevent IS advancing on the Kurdish capital of Irbil and to help protect members of the Yazidi minority who were stranded in Iraq's northwest.
Pansieri said she was particularly worried about the persecution of Christians, Yazidis, Shia, Turkomans and other ethnic groups by IS forces. "These communities have lived side by side, on the same soil, for centuries and in some cases for millennia," she added.

Iraqi police have also executed detainees in Tal Afar and government-allied militias opened fire on a mosque in the Khanaqin district northeast of Baghdad killing 73 men and boys, Pansieri said.

The US ambassador to the UN forum, Stephen Harper, urged Iraq's prime minister designate Haider al-Abadi to set up a multi-ethnic government that would investigate all allegations against government forces and terrorist groups. "The stories that have emerged from IS's bloody assault on Iraq are the ones of nightmares," he said. "Christians and others have been driven from their homes with the threat of 'convert or die.' The Yazidis have been buried alive, beheaded or killed in mass executions."
More than 1.6m people have been displaced this year by violence in Iraq, with 850,000 fleeing their homes in August, according to the UN. Three million Syrians have also fled abroad and 6.5m are displaced internally.

Iraq's outgoing prime minister, Nouri al-Maliki, pledged meanwhile that Iraq will be a "graveyard" for jihadists as he visited the Shia town of Amerli after the breaking of an 11-week siege. Iraqi security forces, Shia militiamen and Kurdish fighters launched a major operation on Saturday to relieve Amerli in the Salaheddin province northeast of Baghdad, where thousands of mainly Shia Turkmen residents had been trapped.
Human Rights Watch said on Monday it had "credible evidence", including photographs, that IS forces had used ground-fired cluster munitions in northern Syria – the first known use of cluster munitions by the militants, although the New York-based watchdog says government forces have used them since 2012.
Pubblicato da Studi ME Africa a 11:37 PM