Leading Bahraini human rights activist Nabeel Rajab has been arrested over Twitter remarks deemed "denigrating" to government institutions.
Rajab, who heads the Bahrain Centre for Human Rights, had just returned to the country after an advocacy tour abroad.
He had served two years in prison for organising anti-government protests before being released in May.
Despite being a majority Shia country, Bahrain's government is Sunni-led and has faced ongoing protests since 2011.
Mr Rajab was often seen in the forefront of those demonstrations and is a vocal critic of the ruler, King Hamad al-Khalifa.
He is also a prominent voice on social media, with almost 240,000 followers on Twitter.
'Ideological incubator'
The Gulf Center for Human Rights confirmed that Mr Rajab had been arrested on Wednesday.
He was summoned for questioning at Bahrain's Cyber Crimes Department before being detained overnight, the statement said.
Bahrain's interior ministry confirmed that Mr Rajab had been summoned and said that he had "acknowledged the charges".
He is due to appear before the public prosecutor on Thursday, the interior ministry said in a statement.
It did not mention which Twitter postings the charges related to. 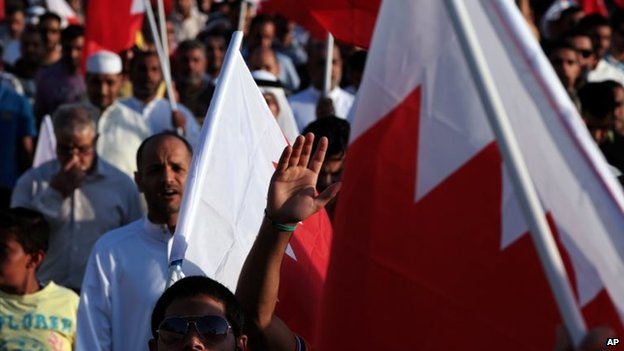 Bahraini anti-government protesters have held regular rallies since 2011
In a tweet made on Sunday, however, Mr Rajab said that many Bahrainis who had joined the Islamic State (IS) militant group had come from state security institutions.
These institutions served as the "ideological incubator" for IS, the tweet alleged.
Before his imprisonment in July 2012, Mr Rajab was repeatedly detained in connection with the pro-democracy protests that erupted the previous year.
Pubblicato da Studi ME Africa a 2:24 PM