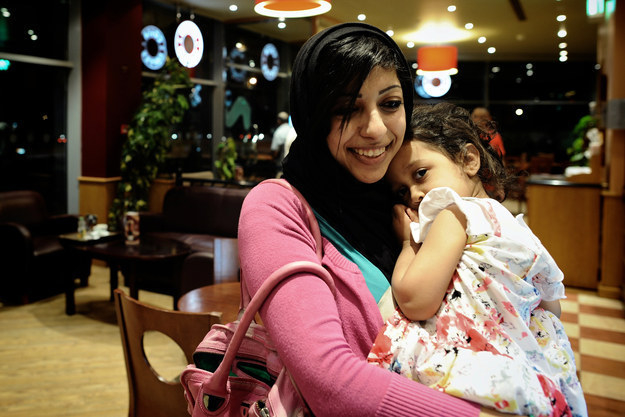 AFP / Getty Images
Bahrain has released a prominent human rights activist and her infant son following international pressure.
Zainab al-Khawaja, 32, was taken into custody in March with her 17-month-old son over several charges, including tearing up a picture of King Hamad bin Isa al-Khalifa, the country’s leader.
The charges have not been dropped, however, and she still faces up to three years in prison.

Her release was confirmed by Bahrain’s state news agency and by her family.

Her sister, Maryam al-Khawaja, told BuzzFeed News: “It’s great for Zainab to be going home to her children, but as far as we know the [charges] have not been dropped and she remains at risk of arrest at any time.
“What Bahrain needs isn’t only for prisoners of conscience to be released, but for the system that puts them in prison to begin with to be changed. Otherwise all releases are temporary, and people will continue to be arrested and imprisoned for practicing basic rights.”
The arrest of al-Khawaja – known on social media as Angry Arabia on Twitter, where she has tens of thousands of followers – had prompted outrage on social media with mounting pressure from the international community.
In February the US secretary of state John Kerry was told by Bahrain’s foreign minister that she would be released on humanitarian grounds, while the British Foreign Office was also known to have raised the case “at the highest levels”.
News of al-Khawaja’s release comes a day after an appeals court increased a prison sentence imposed on a Shia opposition leader, Sheik Ali Salman, from four to nine years.
Sayed Ahmed Alwadaei, director of advocacy at Bahrain Institute for Rights and Democracy (BIRD) called the U-turn a “PR stunt”.
“She should never have been in prison to begin with,” he said. “And in the last 24 hours, Bahraini courts increased an opposition leader’s prison term from four years to nine, rendered over 20 people stateless and upheld the death sentences of torture victims.”
In a letter smuggled from prison – and seen by BuzzFeed News earlier this month – al-Khawaja wrote: “If nothing changes for the people of Bahrain, then my staying in jail or release is not of great consequence,” she writes in the letter. “I am a mother with a job. I will carry my baby with me and continue on my path, so that I can clothe him in resilience and feed him in dignity.”
Bahrain’s Sunni rulers are concerned by ongoing unrest among the majority Shia population. News of al-Khawaja’s detention came shortly after the Kingdom’s interior ministry announced it had deported “several Lebanese residents” over their alleged support for, or involvement with, Hezbollah, which has recently been declared a terrorist organisation by the Arab League.
On Monday UK Foreign Secretary Philip Hammond met King Hamad in Bahrain and welcomed Bahrain’s “commitment to continued reforms” on social media.

Know Your Rights: Bahrain and Self-Determination


Official claims women have been put in jail after fleeing abusive employers
Published: 16:07 May 29, 2016

Manama: Bahrain has denied reports of the existence of a human trafficking network involving members of the Indian community in the kingdom.
The Nationality, Passport and Residence Affairs (NPRA) said the reports were not true and stressed full commitment to international anti-human trafficking conventions and related national legislations regarding entry regulations into Bahrain.
The NPRA said in a statement that entry into Bahrain is possible through various types of visiting visas, in addition to work visas that are provided in cooperation with the Labour Market Regulatory Authority.
All procedures for issuing visas have been approved in accordance to the rights of individuals, including legal actions against violators of related-rules and laws, NPRA added.
Last week, an Indian official claimed that women domestic helpers from Andhra Pradesh were kept in jail in Gulf states for overstaying their visas or after attempting to flee abusive employers, and called for action to address the issue.
“Necessary steps should be initiated to bring them to their native areas safely by providing free travel and necessary visa documents at the earliest possible [opportunity],” Palle Raghunatha Reddy Andhra Pradesh’s minister for non-resident Indian welfare wrote in a letter to India’s foreign minister, Sushma Swaraj.
“Instructions should be issued to Indian embassy officials in Gulf countries to interfere in the matter and provide necessary help in terms of food, clothing and shelter.”
The minister claimed that 25 women were currently in Gulf jails and the Indian government would send ministers to Saudi Arabia and Bahrain next month to investigate.
Indians make up the largest community of foreign workers in the Gulf Cooperation Council (GCC) countries, mostly non-skilled workers in the construction and service sectors.
Reports said that Indian government figures show there are around six million Indian migrants in the GCC, the loose alliance of Bahrain, Kuwait, Oman, Qatar, Saudi Arabia, and the UAE.

50 Days of a Broken Promise in Bahrain

Last month, four days after Bahrain’s Foreign Minister Sheikh Khalid bin Ahmed Al-Khalifa stood next to Secretary John Kerry at a press conference and announced that dissident Zainab Al Khawaja and her baby son Abdulhadi would be released from jail, Iwrote a piece here pointing out that four days was a long time to fill in some paperwork and find the prison key. Tomorrow will be 50 days, and she’s still in jail. You can fly to the moon and back, sail the Atlantic and climb Mount Everest in 50 days if you put your mind to it. The Bahraini government doesn’t seem to be trying very hard to make this happen.“Zainab al Khawaja will be released pending her case in the court. She will be sent to her home and to be with her family,” said the Foreign Minister on April 7. The previous month Zainab started a jail sentence of over three years for a series of peaceful protests, including tearing up a picture of Bahrain’s king to highlight the monarchy’s abuse of power.Fifty days after publicly promising to release her and she’s still in Cell 19 in Bahrain’s Isa Town Prison. This incident says much about the Bahrain ruling family’s relationship to the truth, and about the Bahrain-Washington dynamic. On May 9 Bahrain’s Foreign Ministry repeated that Zainab was about to be released, confirming that the Bahrain government has difficulty distinguishing things it declares to be true from things that really are.Those of us who have followed Bahrain for the last five years aren’t surprised that a senior government minister promised something in front of cameras that wasn’t then delivered. In November 2011 Bahrain’s king accepted the recommendations of an inquiry into human rights violations by his government earlier that year, promising to introduce badly needed reform.It hasn’t happened. No senior government official has been brought to account for the deaths and torture of 2011. Undeterred by the facts, Bahrain’s government earlier this month simply announced the recommendations from 2011 have been “fully implemented”.Promising at a public event with Secretary Kerry to release Zainab and then not doing it is all rather embarrassing for the State Department, which renewed arms sales to Bahrain nearly a year ago in the hope of encouraging human rights reform.This week’s stuttering State Department response to questions about what it intends to do about the unmet promise offers little hope of a firm line from Washington against its repressive ally. And no one is surprised. The State Department has responded to the Bahraini government’s crushing of peaceful dissent by rewarding the regime with more arms. Weaponizing and politically supporting dictators enables their repression, something the U.S. government is willing to do in the case of Bahrain.A few weeks ago Zainab managed to get a letter out of jail. In it she wrote, “If nothing changes for the people of Bahrain, then my staying in jail or release is not of great consequence.” Maybe she’s right, but her staying in jail now represents something else - an embarrassing public snub for the State Department that, 50 days on, is developing into a diplomatic incident.
Seven weeks after promising to release her on “humanitarian grounds” Zainab remains in prison, currently suffering from the flu. Feeling too unwell to look after her son she tried a few days ago to have the baby taken out of prison to be looked after by her family. The authorities refused.
The State Department had trusted the Bahraini government’s intentions for too long, allowing itself to look increasingly gullible as Bahrain’s list of broken promises on human rights gets longer. Next month is the first anniversary of the U.S. government lifting the holds on selling weapons to Bahrain’s military. It’s time to reassess that decision. Trusting the regime’s promises clearly isn’t working.
Follow Brian Dooley on Twitter: www.twitter.com/dooley_dooley
http://www.huffingtonpost.com/brian-dooley/50-days-of-a-broken-promi_b_10144764.html
Pubblicato da Studi ME Africa a 5:43 PM

Dubai: Two Bahraini policemen were wounded in clashes with rioters, according to an interior ministry statement.
“Security forces confronted groups of saboteurs in Bilad Al Qadim,” the ministry said in a statement posted late Thursday on Twitter.
The “saboteurs” hurled Molotov cocktails at the policemen wounding two, it added.
Bilad Al Qadim is the hometown of Shiite opposition chief Shaikh Ali Salman, currently serving a four-year jail sentence for inciting disobedience.
On Thursday, a Bahraini court jailed 19 Shiites for attacks against police, including five life sentences, according to a judicial source.
Pubblicato da Studi ME Africa a 5:31 PM

By Indo-Asian News Service on May 26, 2016 at 1:39 AM
Tehran, May 26 : As many as 17 prisoners were executed in Iran in the past two days for crimes including murder, rape and drugs trafficking, the Iran Human Rights (IHR) website reported on Wednesday.
The prisoners were put to death in two different prisons in Karaj, bringing to almost 60 the number of people put to death in different Iranian prisons this month, IHR said. Condemning the wave of judicial killings, the group urged international community to call for an immediate moratorium for the death penalty. ALSO READ: Watching India-Iran ties ‘very closely’: US

BAHRAIN FIRM IN ITS FIGHT AGAINST TERRORISM - FM