Musician Mehdi Rajabian, who is one of the three Iranian artists each facing jail in connection with their artistic work.
Saeed Kamali Dehghan
Two musicians and a film-maker have begun three-year jail sentences in Iran for the online distribution of underground music.
The three men, who have been described by Amnesty as prisoners of conscience, were summoned to serve their sentences last week after an appeals court upheld their conviction.
A three-minute trial in 2015 found brothers Mehdi and Hossein Rajabian, 26 and 31, and their friend Yousef Emadi, 35, guilty of “insulting Islamic sanctities”, “spreading propaganda against the system” and “illegal audio-visual activities” for the distribution of music unlicensed by the cultural ministry.
They did not have access to lawyers during the trial, activists said. 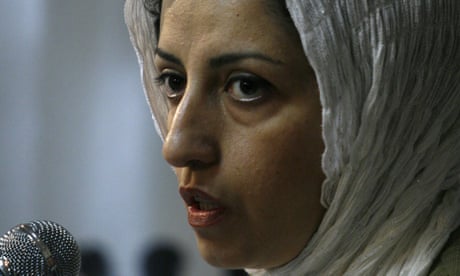 Read more
The three were sentenced to six years in jail but the appeals courts in February commuted the sentences to three years in jail with a further three years suspended, conditional on their “good behaviour”. They have also each been ordered to pay a fine of 200m rials (£4,500).
The trio were arrested in October 2013 by the elite Revolutionary Guards in connection with the now blocked Iranian website Barg Music, which distributed underground music, including many whose lyrics and messages were deemed offensive to the Iranian authorities or the country’s religion.
The three men worked in the same office in the northern Iranian city of Sari. Hossein Rajabian’s conviction has also stemmed from his feature film The Upside-Down Triangle, which dealt with the issue of women’s right to divorce in the country.
During the trio’s initial time in jail, mostly in solitary confinement, the authorities extracted confessions from them which they later used in court as basis for their conviction. Human rights groups have repeatedly condemned what has become a familiar practice by the Iranian judiciary against prisoners of conscience.
Amnesty said the three men were subjected to beatings and electric shocks while in custody before they were subsequently released on bail. They are believed to have all returned to jail at the weekend.
Mehdi Rajabian, the website’s founder, is feared to be suffering from muscular dystrophy which he has allegedly developed after facing rigorous interrogations. “He has to get an MRI every month and take regular shots. His family is very worried about what’s going to happen to his health and treatments once he goes to prison,” an anonymous source has told the New York-based International Campaign for Human Rights in Iran.
The jailing of the three artists comes at a time of growing concern for a number of other prisoners held on political grounds. The family of Farhad Atlasi, a former employee of Iran’s ministry of foreign affairs, broke their silence on Saturday to reveal that he had been in jail for more than seven years, facing a 10-year jail sentence on the charge of collaborating with a hostile nation.
Atlasi has recently been taken to hospital after suffering a stroke. He has since embarked on a hunger strike. Atlasi’s wife told the BBC’s Persian service that he started the hunger strike because the authorities chained him to the hospital bed during his treatment.
Another prisoner on hunger strike is Kurdish-Iranian journalist Mohammad Sadiq Kabudvand, who is serving a 10-and-a-half-year prison term because of his human rights activities, including establishment of the Human Rights Organisation of Kurdistan.
Amnesty described Kabudvand’s health as gravely ill after a month into an ongoing hunger strike and said the Iranian authorities were building a fresh case against him to keep him longer in jail. “Mohammad Sadiq Kabudvand has already spent close to a decade in prison simply for doing his legitimate human rights work and journalism,” said Amnesty International’s James Lynch. “The Iranian authorities must stop toying with Mohammad Sadiq Kabudvand’s life.”
Another journalist on hunger strike is Ehsan Mazandarani, editor-in-chief of the daily Farhikhtegan, who has been sentenced to seven years in prison. According to his relatives, he has lost around 40kg (6st 4lb) since he was arrested in November alongside two other journalists.
Pubblicato da Studi ME Africa a 12:28 AM