Bahrain Mirror: In modern Bahrain, the truth behind violent deaths is hard to establish, highlights Marc Owen Jones in his article published on The Conversation website. "And the fact that they are largely ignored by the international media means you may well be reading about the following events for the first time," he says.
Jones notes that on December 23 2016, a female journalist, Eman Salehi, was shot in front of her son. "Activists have claimed the killing was carried out by an army officer they accuse of being a member of the ruling Al Khalifa family," he says, adding that this has not been confirmed. "And in January 2017, three young Bahrainis were executed after what was widely considered to be an unsafe trial for allegedly killing three policeman." He further notes that shortly afterwards, "scarcely anything was made of the killing of three Bahrainis under unusual circumstances at sea." Redha Ghasra, 29, Mahmud Yusif 22, and Mustafa Yusif 35, were shot by security forces on a boat on February 9. 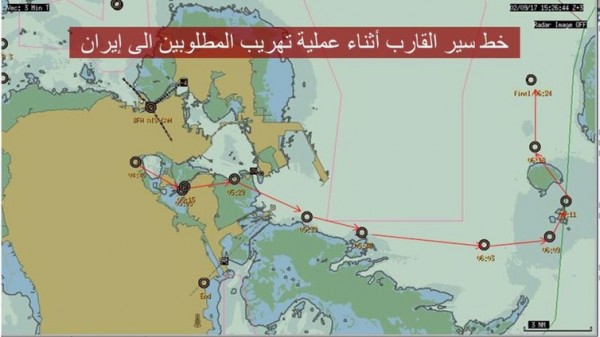 Map released by MOI showing alleged route of the fugitives. Screenshot from public MOI video
Jones further highlights that the MOI released an edited video of that particular police operation, noting that the footage led to interested observers of Bahrain asking questions; "Why was the full, unedited video not released? Why was there no blood in the boat? Why was the audio muted? [...] Fundamentally, how did the operation result in three deaths?"
He also points out that a few weeks after this triple shooting, during another police pursuit of alleged fugitives, "Abdullah Al Ajooz, 22, reportedly died after he fell off a roof while trying to escape. Again, activists such as the former political leader Ibrahim Sharif, raised doubts about how he died. Did he fall, or was he pushed? Sharif's tweets on the matter have resulted in him being charged with 'inciting hatred.'"
Jones underlines that protests against the government in Bahrain reflect a deepening lack of trust in Bahrain's security services. "This is unsurprising," he stresses, adding that in 2011, the independent BICI report found that the security forces had practised systematic torture. "Despite the report's recommendations to hold abusers accountable, as of 2016, even the US State Department cannot verify how many, if any, police officers have been held accountable for abuses since 2011."
International relations play a big part in the dynamics of repression. Jones further stated. "Saudi Arabia, Britain, and the US have all influenced the nature of repression in Bahrain. This has ranged from British officers reportedly training the Bahraini security forces, to Saudi pressure on the Bahrain government to impose death penalties on political prisoners."
Concluding his article, the Bahrain/Gulf expert said that with little to temper the authorities in their treatment of dissent, President Trump's anti-Iran stance is potentially an enabling factor for a hardline approach, asserting that "the prospects for political reform in Bahrain now look increasingly bleak."