Bahrain charges 169 for forming another 'Hezbollah'

Shia-majority country has long accused Iran of stoking violence in the Gulf state.

Bahrain has detained and accused 169 people of forming "Bahrain's Hezbollah", a local version of the armed Shia group based in Lebanon.
The announcement follows scores of arrests and harsh penalties imposed in the Western-allied Gulf state on defendants accused of armed rebellion, while activists say they are peaceful opposition members.
The small but strategic Arab kingdom has been dogged by persistent low-level violence since 2011when its Sunni-minority rulers violently suppressed Shia activist-led protests for a constitutional monarchy with an elected prime minister.
Authorities have repeatedly accused Iran and its allies, including Hezbollah, of fomenting the unrest, a charge denied by Tehran.Attorney General Ahmad al-Hamadi said 169 people, 111 of whom are in custody, will be tried for "forming a terrorist organisation ... under the name Bahrain Hezbollah", in collaboration with Iranian intelligence services.
Hamadi did not specify when the trial would open or when the defendants were arrested. It was also not clear if they had legal counsel.He said some of the detainees were accused of travelling abroad to receive training in weapons and explosives from Iran and its regional allies.Analysts have expressed scepticism about previous Bahraini allegations of Iranian and Hezbollah involvement.Hezbollah is one of the best-trained and equipped armed groups in the world, while most of the Bahrain violence has consisted of stone-throwing and petrol bombs directed at police patrols, or planting crude pipe bombs.

The authorities have closed most peaceful avenues for protest, banning the main Shia movement Al-Wefaq, which was the largest bloc in parliament, and throwing dozens of its leaders behind bars. They and their Gulf Arab allies have also blacklisted Hezbollah as a "terrorist organisation" and banned their citizens from any contact with the group or its members.The crackdown has drawn periodic criticism from Western governments, but the kingdom's strategic position just across the Gulf from Iran makes it a key ally.The islands are home to the US Fifth Fleet and house a new British naval base completed earlier this year.
The United Nations and rights groups have accused Bahrain's government of crushing dissent and violently cracking down on protests and members of a peaceful political opposition.

Pubblicato da Studi ME Africa a 12:27 AM

Britain invokes spy clause to cover up payments to Bahrain

https://www.thetimes.co.uk/edition/world/britain-invokes-spy-clause-to-cover-up-payments-to-bahrain-dlv00c66f?utm_medium=Social&utm_source=Twitter#Echobox=1537604522
Millions of pounds of British taxpayers’ money is being spent in secret on bodies linked to serious human rights abuses in wealthy Gulf states after the government blocked the release of basic information about a shadowy fund administered by the Foreign Office.
Multiple Freedom of Information requests for details of how the £20 million-a-year Integrated Activity Fund (IAF) is being spent have been refused on the basis of national security and other exemptions relating to the involvement of the intelligence services.
Projects under the fund include a controversial security and justice programme in Bahrain that the foreign affairs committee said last week should be reviewed in light of evidence that Bahraini prison staff and security personnel had been implicated in torture and extrajudicial killings, amid…
Pubblicato da Studi ME Africa a 1:04 AM

FIVE prominent terror incidents in Bahrain which led to three deaths have been highlighted in an international report on terrorism.
Two Bahraini police officers and one militant were killed and 13 others were injured in these separate incidents, said the US State Department’s annual Country Reports on Terrorism for 2017, released on Wednesday.
The incidents listed are:
The death of First Lieutenant Hisham Al Hammadi on January 29. The off-duty officer was shot dead at a farm in Bilad Al Qadeem, with outlawed group Saraya Al Ashtar claiming responsibility for the shooting on its Facebook page while warning of further attacks.
Bahraini Nabeel Abdullah Al Samee, a 40-year-old, died on July 19, when a homemade explosive accidentally went off while he was carrying it in a farm in Al Hajer village.
On October 1, a militant group Wa’ad Allah (God’s Promise Brigades), a suspected Al Ashtar Brigades affiliate, detonated an IED targeting a police checkpoint in Daih, injuring five police officers.
Militants detonated an IED along a major highway targeting a police bus killing one officer and injuring eight others on October 27.
An oil pipeline exploded in the village of Buri, on November 10 which, according to officials, was an attack by Bahraini militants trained in Iran.
Pubblicato da Studi ME Africa a 12:15 AM

Candidates to submit applications on October 17-21
Manama: Bahrain will hold its next quadrennial parliamentary elections in November, according to a royal order issued on Monday.
Eligible voters will be able to cast their ballots from 8am until 8pm on November 24, the order said. The second round in the constituencies in which there are no clear winners will be held on December 1.

Elections for Bahrainis abroad will be held in the kingdom’s embassies, consulates and diplomatic missions on November 20, with the second round taking place a week later, on November 27.
Candidates for the 40-seat Council of Representatives, the lower chamber of the bicameral parliament, have five days, from October 17 until October 21, to submit their applications to the competent election committees.
Bahrain has been holding parliamentary and municipal elections regularly every four years since 2002 following the end of a political hiatus through constitutional changes that gave women the right to vote and run in elections.
Although no woman won in the elections in 2002, history was made in 2006 when Lateefa Al Gaood became the first woman to be elected to a parliament in the GCC.
In the last elections in 2014, independents won 37 of the 40 seats in a massive blow to political groups. In 2010, only 17 independents were elected.
Despite various challenges in the region, all the elections were held without delays in 2002, 2006, 2010 and 2014.
“We are keen on continuing to develop political and democratic practices in Bahrain,” King Hamad Bin Eisa Al Khalifa said on Monday as he chaired the weekly cabinet session.
“We are fully determined to preserve our democratic achievements and to strengthen them through constitutional institutions. The 16 years of parliamentary action are a significant asset in enhancing democratic practices and consolidating popular participation,” King Hamad said.

Manama: Bahrain on Sunday announced its candidacy for membership of the United Nations Human Rights Council in Geneva for 2019-21.
The foreign ministry said the move came after Bahrain received the support of the Council of the Arab League and the endorsement of the Asia-Pacific group at the UN.

The elections will be held in October in New York.
Assistant Foreign Minister Abdullah Bin Faisal Al Doseri highlighted at a meeting with the Arab ambassadors accredited in the kingdom, Bahrain’s programme for the candidacy and the voluntary pledges it submitted to protect and promote human rights regionally and internationally.
“It is time to work at the multilateral level, to share the experiences of Bahrain and its initiatives in the development and promotion of human rights, as well as its national mechanisms and achievements, in order to reach a long-term partnership to promote such initiatives and values internationally,” he said at the meeting.
Al Doseri said that King Hamad Bin Eisa Al Khalifa has launched several initiatives to promote tolerance and peaceful coexistence among people regardless of their faith.
“Such an approach has led to several achievements in the field of democracy, guaranteed rights, freedoms, and human, political, economic and social development in various fields, including education, health, communication, media and sustainable development,” he said.
The periodic international reports submitted by Bahrain under the international agreement it joined reflect the Kingdom’s commitment to cooperate with international entities to create distinguished partnerships, he added.
The ministry plans to hold a second meeting with the non-Arab ambassadors on Tuesday.
The Human Rights Council is an inter-governmental body within the United Nations system made up of 47 member countries responsible for the promotion and protection of all human rights across the globe.
Pubblicato da Studi ME Africa a 12:45 AM 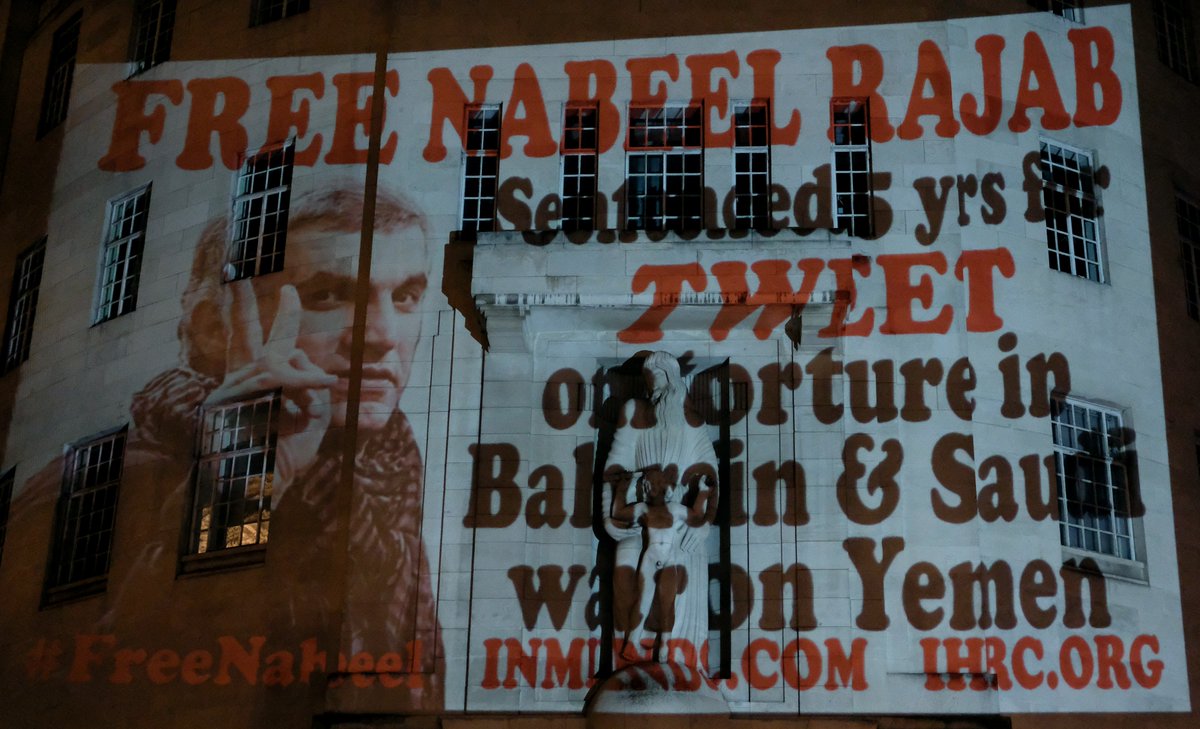