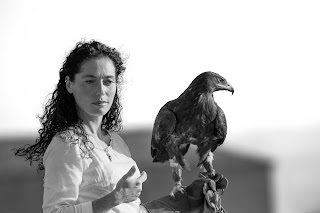 ARIA, UOMINI, FALCHI " is a photographic volume (to the second reprint) of Serena Galvani, a photographer, sailor and entrepreneur from Bologna, which contains timeless images related to Falconry, declared in 2010 Cultural Heritage of Humanity by UNESCO and since 2016 also from Italy.

The idea of ​​the book "ARIA, UOMINI, FALCHI" was born from the passion of Serena Galvani for this ancient world.
"I read a book about Frederick II, the one who brought falconry from East to West, and I became curious. - tells Serena Galvani - In the countryside with a friend who has two hawks, I tried to relate to them and it was a wonderful experience. The bird of prey is a King. And so I started taking pictures of falconer gatherings and I learned about this almost esoteric art. "
The book is born from the photographs taken during several years of  Falconry gatherings, from which images were born enhanced by the expressive power of  black and white that unfold in a story never articulated by the time in which the themes are embodied in the proud looks of men and birds of prey that merge with each other, in sails and wings that together seek the wind, in rugged landscapes with remote medieval towers where the subjects cross the past, so as to return to the viewer a memory that carries within it the signs of distant ancestors. Air, sky and water suggest the path to freedom, where AIR is the dominant element that drives the sails but also the flight of the hawks.


"With photography I express the motions and passions of the soul - says Galvani - It is the communication of that eloquent freedom that extends into the mind and dreams ... It exists in the infinite movement, as well as life."

Aria, Uomini e Falchi is also an exhibition that arrived in Malta after a series of stops around the world (Italian Embassy in Kuwait, Melfi). A permanent exhibition set up in the Verdala palace, an ancient building of the Maltese Baroque built in 1588, which dominates the whole island and is the summer residence of the President of the Republic, inaugurated on the occasion of the ancient ceremony of the Maltese Falcon by the President of the Republic of Malta to the King of Spain, in memory of the ancient "tribute of the Maltese falcon" which was established in 1530, when King Charles I of Spain ceded the sovereignty of the island to the Knights of Saint John for having settled there and having contributed to maintaining security in the Mediterranean. 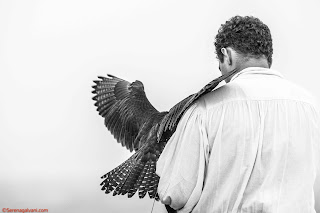 After many years dedicated to naturalistic photography, Serena Galvani from January 2012 to July 2014 followed, as a professional photographer, the story of the Costa Concordia, collaborating with the major nautical magazines in the sector and, exclusively with the Headline ‘FARE VELA Magazine’. As a photographer, she has also collaborated, since 2013, with the major Italian Falconry associations and with multiple magazines in the sector.
In 1998 he founded A.R.I.E. (Association for the Recovery of Vintage Boats) with which it contributes to the preservation of boats of historical value and of national nautical heritage and has approved in 2003 by the Italian Parliament a section of the Law according to which boats of historical value are considered in effect 'cultural heritage'. Among the important restorations carried out by the Association, we recall that of the 'Leone di Caprera' (boat unique in the world, 1880), carried out with the collaboration of the Guardia di Finanza, today at the National Museum of Science and Technology "Leonardo da Vinci" of Milan. 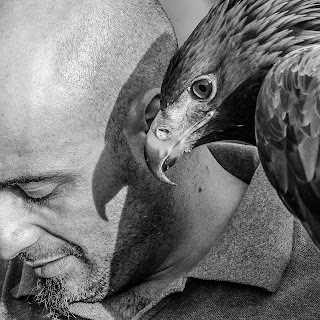