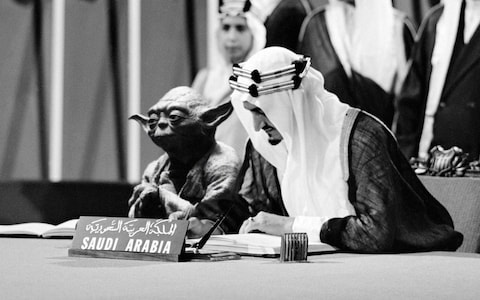 The founding of the United Nations was a Thistoric moment that saw leaders from across the planet join together to commit to a more peaceful world.
But most historians don’t remember the Jedi master Yoda being among them.
The Saudi government is scrambling to withdraw a history textbook that accidentally included a doctored photograph of King Faisal sitting next to the little green Star Wars character.
The picture was supposed to illustrate a section on the King’s rule but somehow the book’s editors used a version that showed Yoda perched next to the monarch as he signed the UN charter.

“The Ministry of Education regrets the inadvertent error,” said Ahmed al-Eissa, the Saudi education minister.
“The ministry has began printing a corrected copy of the decision and withdrawing the previous versions, and has formed a legal committee to determine the source of the error and to take appropriate action.”
The black-and-white photograph of Faisal and Yoda is the work of a 26-year-old Saudi artist named Abdullah al-Sheri.
“I am the one who designed it, but I am not the one who put it in the book,” he told the New York Times.
Mr al-Sheri goes by the nickname Shaweesh and the picture was part of a series that showed film characters discreetly added to photographs of major moments in Arab history.
One image shows Darth Vader standing behind Lawrence of Arabia and the king of Iraq at the Paris peace conference in 1919, which divided up much of the Middle East.
Another has a young Arab boy looking down at Captain America from the back of a truck.
Mr al-Sheri said that he paired up the king and Yoda because both were intelligent and because Yoda’s green skin and green lightsaber matched the green of the Saudi flag.
“He was wise and was always strong in his speeches,” Mr. Shehri said of the king. “So I found that Yoda was the closest character to the king. And also Yoda and his light saber – it’s all green.”
He only became aware that his picture had found its way into a textbook when his mother, who is a teacher, texted him after seeing a copy.
“I meant no offense to the king at all,” he told the New York Times.
Pubblicato da Studi ME Africa a 4:11 PM