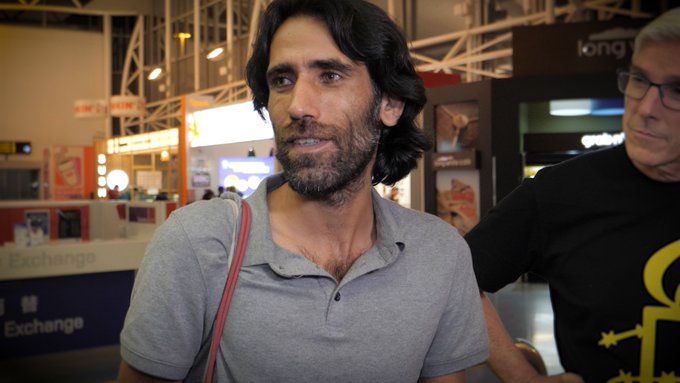 
Behrouz Boochani, the Kurdish Iranian refugee and journalist who became the voice of those incarcerated on Manus Island, has landed in New Zealand and says he will never return to Papua New Guinea or Australia’s immigration regime.
“I will never go back to that place,” he told the Guardian, shortly after leaving PNG. “I just want to be free of the system, of the process. I just want to be somewhere where I am a person, not just a number, not just a label ‘refugee’.”
Over the course of six years forcibly held by Australia’s offshore processing regime in PNG, Boochani emerged as the voice of the Manus Island detention centre anda tireless campaigner for the rights of those detained by Australia. He has written extensively for the Guardian on life in detention and won Australia’s richest literary prize for his book, No Friend But the Mountains.
His arrival in New Zealand will be of acute political sensitivity in Australia. The Australian government has consistently refused overtures from New Zealand to resettle refugees held in offshore detention, arguing it would undermine Australia’s hardline policies towards boat arrivals.
Boochani told the Guardian he was elated to be free and was trying to adjust to a still-indeterminate liberty.
“After more than six years, I am very, very tired,” he said. “But I am glad to be away from that place.
“Everyone in Manus carries so many painful memories, we can never leave them on that island … but I am happy in my heart: I feel free.”
About three-quarters of the refugees and asylum seekers sent to PNG by Australia from 2012 onwards have left, either to Australia, to the US, or to other countries, Boochani said. Seven have died. But Boochani said he was distraught that some remained trapped there, in particular 46 men who are being held, essentially incommunicado, in Bomana prison in Port Moresby.
Over the six years he was held on Manus Island and in Port Moresby, Boochani witnessed friends shot, stabbed and murdered by guards on Manus Island, saw others die through medical neglect, and watched others descend into mental anguish and suicide.
He was twice tortured for several days in the notorious Chauka solitary confinement block, in the now-demolished Manus detention centre. He was jailed for eight days for reporting on a hunger strike in the centre, which was put down by force by PNG police.
But throughout he maintained a role as a working journalist on the island, the most prominent – and, initially, the sole – voice from within the secretive regime.
“I am a journalist,” he told Guardian Australia in 2015. “I am still a journalist in this place. This is my work, my duty.”
He became a regular correspondent for the Guardian and other news outlets, leading detailed investigations based on eyewitness accounts, interviews inside detention and leaked documents.
And, famously, he wrote a book documenting detention via WhatsApp message, painstakingly transmitted sentence by sentence, and translated in Australia.
No Friend But the Mountains – the title is drawn from an old Kurdish proverb –won the Victorian premier’s prize for literature. From detention, he filmed – again using a mobile phone kept hidden from authorities – a documentary of life inside the Manus centre. Chauka, Please Tell Us the Time was screened at festivals across Australia, and in London and Berlin.
A Kurdish investigative journalist in his homeland, Iran, Boochani was persecuted for his reporting and his support for Kurdish independence, and fled for Australia in 2013. He arrived by boat on Christmas Island, an Australian territory in the Indian Ocean, in July 2013. He was transferred to Manus Island on 27 August 2013.
He spent 2,269 days held by Australia’s offshore processing regime.
Boochani left PNG on Wednesday, travelling a circuitous route to reach New Zealand, where he will appear at a literary festival in Christchurch.
He has a one-month visa to stay in New Zealand. He is still hopeful he can resettle in the US – which has accepted him as part of Australia’s “refugee swap” deal struck between Malcolm Turnbull and Barack Obama.
But if that was denied because he is now in New Zealand, Boochani said: “I will look at possibilities”.
“The process for America,” he told the Guardian, “it was too long, I didn’t know. I needed to get out, to be free. I will never go back to PNG or Australian immigration detention.”
Since 2013 New Zealand has offered to accept 150 refugees each year from Australia’s offshore processing centres on Manus and Nauru. Australia has rebuffed this, arguing that refugees could, if they eventually became New Zealand citizens, ultimately travel to Australia (even though Australia regularly restricts some New Zealand citizens from travelling to Australia).
But New Zealand and Australia relations have strained more broadly over immigration. In addition to Australia’s refusal to entertain New Zealand’s offer to help in ending offshore detention, Canberra’s hardline attitude in deporting New Zealand citizens who receive criminal convictions, even if they have no family or connection to New Zealand beyond being born there, has deeply offended Wellington.